IPLAST summoned its distributors for a conference. 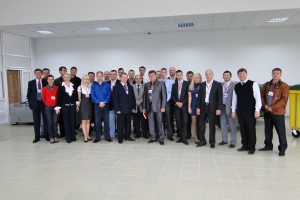 07.10.2011
On September 15th, 2011 iPlast Ltd. ran a conference for its distributors as part of the development program of the distribution network. The conference counted representatives of 20 companies from such cities as Moscow, Saint-Petersburg, Yekaterinburg, Barnaul, Novosibirsk, Chelyabinsk, Kazan, Togliatti, Cheboksary, Naberezhnye Chelny, Kiev, Vinnytsia. Members of the conference had a chance to estimate by themselves the changes that had been performed in the company since their previous visit in January 2010. Among the greatest news were new implemented technologies and, as a consequence, a greater variety of products, let alone newly added production and warehouse areas. IPLAST management shared with the partners their plans for future progress of the business and outlined the objectives and prospects of further collaboration with the distributors. It became a good tradition of the company to organize conferences for its distributors, thereby contributing to consolidation and development of the partnership. Year by year distribution network of iPlast keeps growing and tapping new markets. At present it involves more than 30 companies around Russia and in CIS countries.

To request a price, send an email to spb@iplast.com