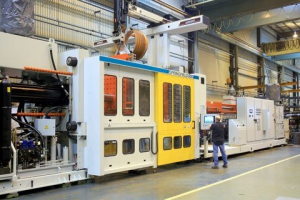 13.04.2012
The new molding machine operating low-pressure molding technology with structural foaming has been mounted on IPLAST production site in Nizhnekamsk. Its capacity makes 300 tons of polymeric products per month. What makes the machine unique is its capability to produce extra strong large-sized polymeric items weighting up to 45 kg at optimum work load of equipment. The machine has a total output capacity of 1000 kg per hour. The first production lot on the new molding machine has been output. It is the Uniloy molding machine that is being run for mass production of pallets 1450×1150 mm and of covers for high capacity polymeric containers (900 kg and more). Trial tests of the container which had been elaborated together with the Western partners, were loaded with synthetic rubber and dispatched to European consumers in Poland, Spain, Germany, Hungary, to major tire producers such as Goodyear, Bridgestone, Continental, Michelin. Positive reports have been received from all the companies. Elaboration of high capacity polymeric container for synthetic rubber is yet another step in company development providing leadership of iPlast in the market segment of packaging for synthetic rubbers.

A new 360 L waste container was successfully brought into circulation in I-Plast production site in Nizhnekamsk in September 2019.