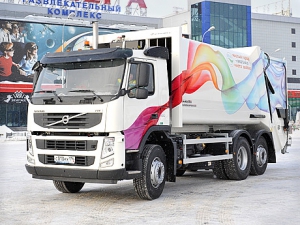 31.01.2013
The Conference took place in Kazan «Riviera» Complex on January 25, 2013. The event was held to demonstrate the new FAUN garbage truck assembly by Kazan «Ecotekhprom» company and to share Kazan’s experience on waste handling. Participants of the conference counted 68 representatives from 28 regions of Russia. Being a producer of the first Russian polymeric waste container, IPLAST defined the advantages of the product use to the participants of the conference. The new waste container, possessing a number of valuable features, ideally goes together with modern garbage trucks including German truck FAUN. Twelve trucks of this very model were bought by «Clean City» JSC ( «PZhKH»). 1100 liters waste containers made by IPLAST have already been bought on a leasing basis by «Clean City» JSC ( «PZhKH») and are successfully operated in streets of Kazan. At the moment IPLAST capacities allow to produce more than 180 thousand containers per year thereby providing the growing needs of Russia and the CIS countries with waste containers of the advanced kind. The beginning of FAUN garbage trucks assembly in Kazan as well as the production in the same region of up-to-date waste containers creates an excellent opportunity for the start of new ways of solid waste handling based on effective technologies.