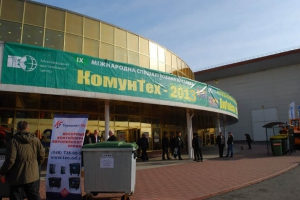 18.11.2013
IPLAST participation in the «IX International COMMUNTECH 2013» Exhibition which was held in Kiev from November 5 to November 8 became a meaningful event for the Company. This exhibition brought together representatives of housing and communal services, environmental and municipal improvement specialists from the cities of Ukraine, Russia, CIS countries and Europe. IPLAST exposed its polymeric containers for solid waste with volumetric capability of 1100 l and 120 l and some other products as well. Metal and plastic garbage containers of the European production have been widely used in Ukraine up to the present days. In this regard the made in Russia plastic container is a good alternative. It exhibits not only fine consumer properties but also provides maximum efficiency when transporting. And the attractive price of IPLAST container makes it competitive if compared with its European analogs. At the exhibition IPLAST container drew attention of a specific group of visitors. Several negotiations were held by the management of the Company with the heads of Ukrainian enterprises that would represent IPlast solid waste containers on the Ukraine territory. Participation in «CommunTech — 2013» Show is a progressive advance iPlast company undertakes to develop the perspective market of Ukraine.