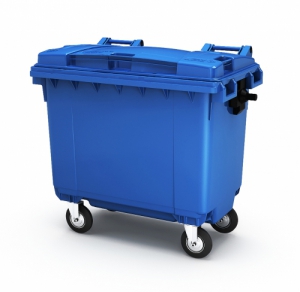 31.03.2014
The line of polymeric garbage containers of the Company was replenished with one more type as IPLAST started production of 660 liter container. As well as its predecessors, a new bin is manufactured of virgin polypropylene that makes it strong enough for usage in severe Russian climatic conditions. The 660 liter polymeric container is designed for collecting of solid waste in multi storey apartment buildings. For this purpose the container is installed directly into the garbage chute shaft and/or on a street container platform. Another intended use of the container is for collecting garbage from the private housing territories. The new dumpster is produced according to the requirements of the European EN 840 standard. The container is equipped with metal cored rubber covered wheels on a bearing, a strengthened wheel fastening unit and fully molded handles. The Company’s production capacity allows to produce up to 80 000 pieces of containers per year. IPLAST experts are sure that this type of garbage container as well as its 1100-liter forerunner, will approve itself in the markets of Russia the CIS countries. The first lot of the new product had been shipped to the customer who remained satisfied with the quality of the container. The new model of the garbage dumpster, along with the other models of IPLAST containers for solid waste, will be represented at the international IFAT Exhibition that is to take place on May 5 through 9, 2014 in the city of Munich, Germany. You are welcome to visit IPLAST stand at the IFAT exhibition (No.520, B2 Hall).

A new 360 L waste container was successfully brought into circulation in I-Plast production site in Nizhnekamsk in September 2019.