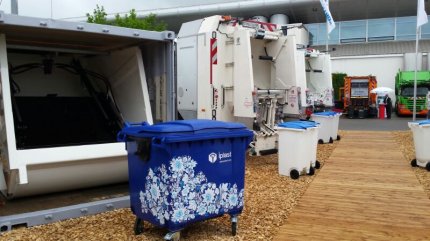 16.05.2014
Summarizing the results of World Leading Trade Fair IFAT held in Munich it may safely be said that IPLAST has met the purpose in hand. The show visitors got convinced that a major player in the name of IPLAST appeared on the Russian market of containers for solid waste, and a bin produced in Russia comes to be a potential and high-quality product capable of competing with the best foreign samples. Being the first Russian manufacturer of the whole range of plastic waste containers with capacity from 120 up to 1100 liters iPlast presented their products to the visitors of the stand. Its bins, different in color and size and decorated with Russian national ornaments, attracted attention of all participants of the Exhibition. According to experts’ forecasts beautiful and ecologically safe containers should appear in most Russian cities in the nearest future. Solid waste collection and recycling are of current interest like never before. A modern waste bin being operated together with a modern garbage truck is a guarantee of waste management efficiency. Incidentally, the process of garbage unloading from IPLAST container into garbage trucks produced by leading European companies could be watched in a demonstration zone of the IFAT Fair. It should be noted that IFAT Trade Fair happened to be the first international exhibition for IPLAST. And the debut was successful. For a short period of time many meetings and negotiations with potential and actual clients of the Company were held. The stand was visited by the heads and senior staff of European companies working in the field of collection and transportation of solid waste. The managers of service companies from Russia as well as from CIS countries displayed their interest in cooperation with IPLAST. The European quality of the Russian product certified by DIN 840, its reasonable price and efficient logistics make the iPlast container attractive not only for domestic but also for foreign customers.

Today, on June 3, 2020, at the plant of IPLAST in the city of Azov, Injection molding machine Engel Duo 5500 was commissioned, it is planned to manufacture polymeric garbage containers with a volume of 1100 liters.