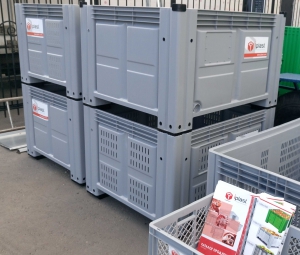 15.09.2017
«I-Plast» presented its large-size iBox containers and other plastic packaging for fruits and vegetables on the nationwide exhibition «The Gardener Day» which took place in Mitchurinsk, Tambov region starting September 8, 2017. The product line of large-size polymer iBoxes 1200х800, 1200х1000 and 1130х1130 mm containers as well as product line of middle-size fruit boxes (600х400 mm) are designed for collection, transportation and storage of agriculture production such as apple, pear, plum, watermelon, potato, beetroot, carrot. Large in size (up to 700L), strong containers stackable up to 12 stories let keep the crops in special gas-regulated stocks in the most effective way. The event was visited by Peter Chekmarev the Head of the Department of Plant-Growing, Chemicalization and Plant Protection of the Russian Federation. The delegation became interested in a new container of «I-Plast». The company specialists showed the capability of the modern iBox and told about the plans of the company connected with opening a new manufacturing site in Southern Federal District to be closer to the Russian producers of fruits and vegetables. The specialists of gardening and plant-growing sphere can observe the iBox containers and other polymer packaging of I-Plast on the territory of Plant-Growing Development Center in Mitchuirinsk, Russian city of science.

“I-Plast” has launched the production of new bread box

In 2021 I-Plast has launched the production of several new crates for the food and processing industries at once.