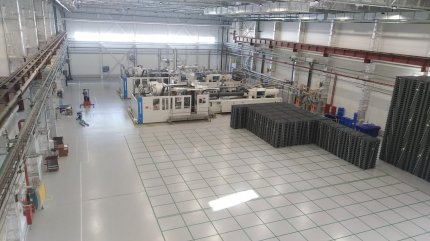 
IPLAST Company gave a start to a new successful project: a start of production in Tobolsk, Tyumen region. The projeсt purpose is the supply of ZAPSIBNEFTEKHIM LLC, the largest new petrochemical complex of Russia, SIBUR group of companies’ enterprise, with plastic pallets with dimensions of 1300х1100 mm for storage and transportation of produced polyethylene and polypropylene in bags.

For the implementation of that project:

- The production premises with total area of 4200 sq. meters were constructed;

- Two injection-molding machines with clamping force of 2700 tons made by the leading European manufacturer Krauss-Maffei, Germany, were assembled and put into operation.

The production capacity of IPLAST Ltd. in Tobolsk let produce 656 thousand polymer pallets per year. The volume of processed polymeric raw material in the first stage of production start will reach 7000 tons per year.

The scope of investments into the project amounted 750 million rubles.

The general director of IPLAST Ltd. Maksim Zhukov commented out the setup of a new production site in a following way: “The project with ZAPSIBNEFTEKHIM LLC is the fourth IPLAST production site on the territory of Russia in succession. The project is remarkable not only for us, but also for the chemical industry of Russia in general, as this refers to creation of new standard of packaging of polymers. The application of a recyclable PE pallet in logistic chain is a new stage of development of chemical industry, which meets the current ecological demands”.

For Tobolsk the production startup of these enterprises is of fundamental importance: new job positions, well-established wages as well as tax payments into the city funds.

“I-Plast” has launched the production of new bread box

In 2021 I-Plast has launched the production of several new crates for the food and processing industries at once.